Hilo is a small, safe and friendly city of about 45,000 people.  The town overlooks Hilo Bay and is situated upon two volcanoes:  Mauna Loa, an active volcano, and Mauna Kea, a dormant volcano and the site of the world’s most important ground-based astronomy observatories.  Hilo is home to the ‘Imiloa Astronomy Center of Hawai’i as well as the annual Merrie Monarch Festival, a week-long celebration of ancient and modern hula.

It is amazing how diverse a seemingly tiny island can be:  on the Big Island, you can find active volcanoes at the Hawai`i Volcanoes National Park, lush rainforests on the Hamakua Coast, black sand beaches of Punalu`u, and even snow on the peaks of Mauna Kea!  In Hawai`i, there are generally two seasons:  summer runs from May to October and winter extends from November to April.  The average daytime summer temperature is 85 degrees Fahrenheit and the average daytime winter temperature is 78 degrees Fahrenheit, with evening temperatures about 10 degrees cooler.  Bring an umbrella, because it rains often in Hilo. 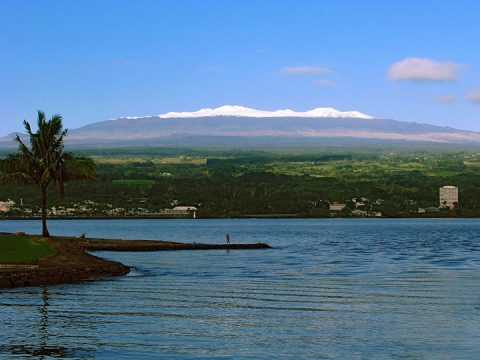